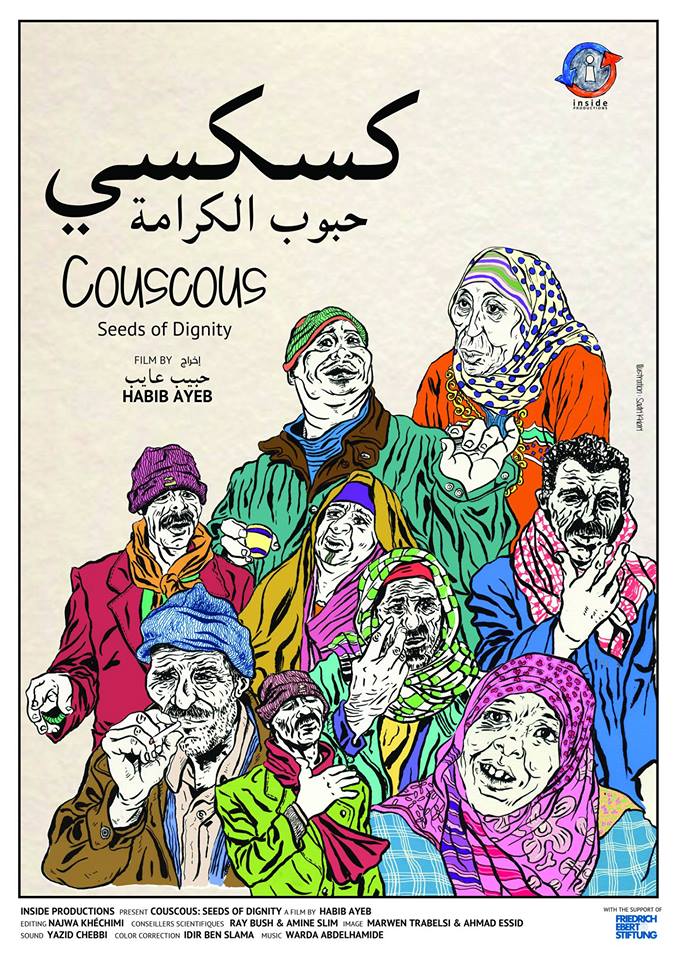 We are delighted to invite you for a film screening and an evening discussion of Habib Ayeb’s “Couscous: Seeds of Dignity”. This award-winning documentary focuses on the political, social, economic and ecological conditions of cereal cultivation and couscous production in Tunisia and examines the centrality of the food/agrarian question to the Tunisian struggle for individual and collective human dignity as well as questions of independence and sovereignty. These issues are more relevant than ever as mobilization continues across the country and Tunisians demand an alternative to the (neo)liberal, imperial-backed order that has historically produced structural inequality, marginalization, and dependency.

The film will be followed by a discussion with the film’s director, Habib Ayeb. Panelists will engage the film and discuss the intersections with their own political commitments and struggles against imperialism, (neo)colonialism, and racial capitalism as well as explore ways to strengthen transnational solidarity around food sovereignty, food justice, land, labor and other justice struggles.

“Couscous: Seeds of Dignity”: Almost self-sufficient in grains until the beginning of the 20th century, Tunisia now imports more than half of its food needs as dependency increases from one year to the next. Habib Ayeb’s documentary focuses on the conditions of cereal and couscous production and demonstrates how the food question is in fact at the heart of human dignity and food sovereignty. 2017. 60 minutes.

Habib Ayeb: born in Tunisia, Habib is a social geographer, activist and filmmaker. He is also a researcher and Associate Professor at the University of Paris 8 in Saint Denis (France). His domains of research are: competition over resources in rural and agricultural areas; poverty and marginalization dynamics and processes; and food sovereignty. He also made other documentaries such as “Gabes Labess” in 2014.

Suzanne Adely is the regional organizer for the Food Chain Workers Alliance, a coalition of worker-based organizations throughout the U.S. Food Chain. Suzanne is a long time Arab-American community organizer, with a background in law and global labor and human rights advocacy. She has worked in New York, Chicago, India and the MENA region. Active in the National Lawyer Guild, Al-Awda-NY, and the US Palestine Community Network.

Mabrouka M’Barek was an elected member of the Tunisian Constituent Assembly which drafted the new constitution. She is a member of the Global Working Group Beyond Development, a group, hosted by the Rosa Luxemburg Foundation, which brings together activists and academics from all over the world to address the necessity to end the social and ecological destruction for the sustainability of life in all its dimensions.. The Group’s first book – Alternatives in a World of Crises – portrays alternative-building process of decolonization, anti-capitalism, anti-racist, depatriarchalization and ending the predatory relation with Nature, from Nigeria, Venezuela, Ecuador, India, Spain and Greece. Mabrouka has just completed her first monograph contextualizing the Arab uprisings from a decolonial, radical feminist and anti-capitalist perspective.

Lamis Deek is a Palestinian Attorney and Human Rights Advocate based in New York and serves as Chief Counsel to the Global Justice and Human Rights Law Network. She has litigated Palestinian, Arab and Muslim complex civil and criminal cases ranging from Free Speech and Free Worship to State repression and trumped up terrorism charges. Internationally, Lamis handles matters related to Compliance, Anti-Corruption, Human Rights Abuses and Crisis Management. Lamis has been an advocate for Palestinian, Arab, and Muslim rights for nearly two decades and regularly lectures on a broad range of issues related to Palestine. She is also a frequent lecturer on issues related to government surveillance, discrimination, and predatory policing and prosecution of Muslim, Arab and Palestinian Communities. She is currently leading several initiatives dedicated to the development of new quasi-state and state-alternative justice and restoration mechanisms for Palestine and Palestinians. Lamis Deek is member of the National Lawyers Guild, a long- time member of several Palestinian Organizations, including Al Awda-The Palestine Right to Return Coalition- and is an advisor to several community and non-Profit Organizations.

Maria Luisa Mendonça is a visiting scholar in the Center for Place, Culture and Politics at the Graduate Center of the City University of New York (CUNY). She holds a PhD in Human Geography from the Department of Philosophy, Literature and Social Sciences at University of Sao Paulo (USP). She is the founder of Rede Social de Justiça e Direitos Humanos (Network for Social Justice and Human Rights – www.social.org.br) in Brazil and the editor of the book “Human Rights in Brazil,” which has been published annually since 2000. From 2014 until 2016 she was a visiting professor in the International Relations Department of University of Rio de Janeiro (UERJ). In 2013 she was a visiting scholar in the Development Sociology Department at Cornell University. Maria Luisa is the director of “Strong Roots”, a film that documents the struggles of peasants in the Landless Workers Movement (MST) in Brazil, which is engaged in a national political campaign to occupy and cultivate unused land.

Linda M.H. Tigani – a fearless, energetic and passionate advocate for Land Liberation through her work with the Malcolm X Grassroots Movement and Black 4 Palestine. Born and raised in Brooklyn, New York, Linda is an first generation Ethiopian-Sudanese Social Worker and Researcher. She is a graduate of Bard College with a Bachelor’s degree in Sociology and the Silberman School of Social Work with a Masters of Social Work. Linda is dedicating her life to ending violence against women of color through land dispossession and resource extraction.