April 19, NYC: Beyond the Drug War: The Struggle for Peace and Human Rights in the Philippines 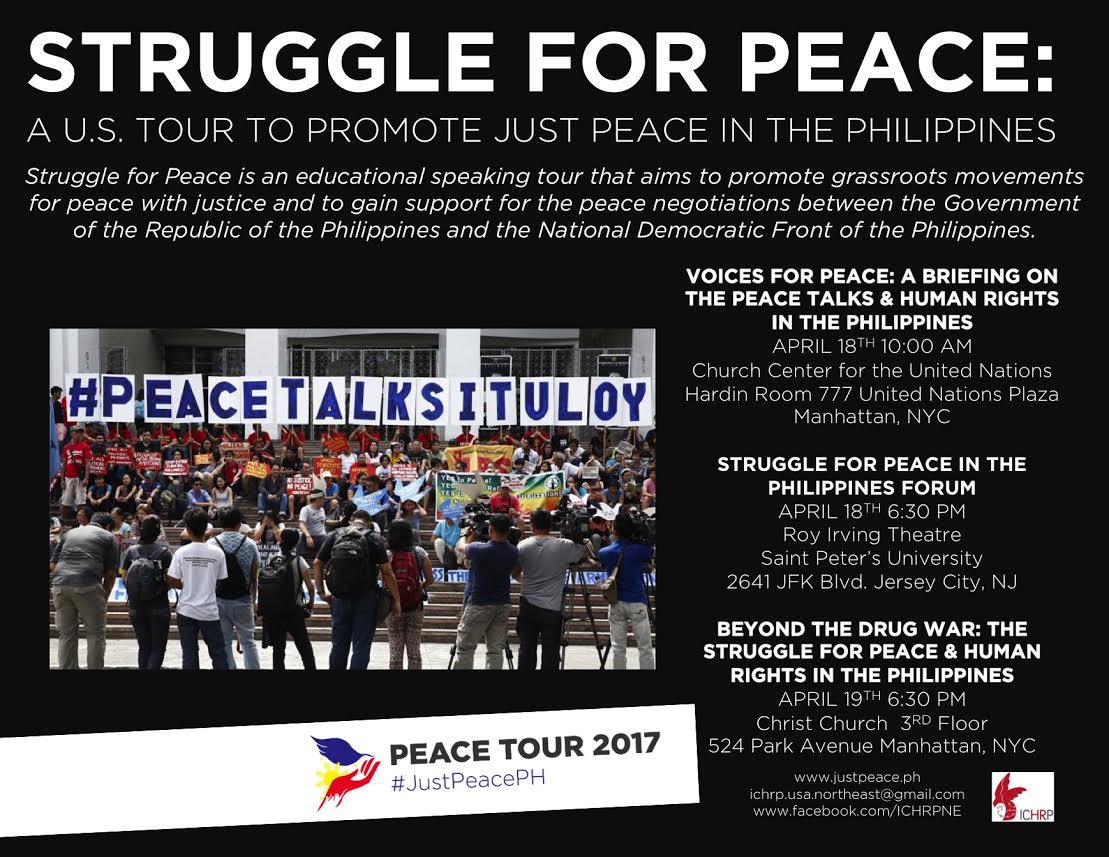 Experts in the social, economic and political contexts which have given rise to the civil war in the Philippines, the delegates will speak to US audiences about the history, content, and significance of the peace negotiations and the Filipino people’s struggle for a just peace. Joined by the leadership of indigenous peoples organizations and the top human rights organizations in the Philippines, they will speak about grassroots efforts to catalyze significant social change and the importance of the peace negotiations to communities on the ground.

The successful completion of the formal peace talks could have profound implications for Philippine society that would address the social, political, and economic roots of the so-called drug menace and the decades-old civil war. The GRP-NDFP peace negotiations are the only peace negotiations in the world that address far-reaching social and economic reforms at the national level.

Josephine Pagalan is spokesperson of Kasalo Coalition of Indigenous Peoples’ Organizations in Caraga. Despite threats to her life, she continues to speak out against corporate encroachment and militarization of their ancestral domain.

Dulphing Ogan is Secretary General of Kalumaran – an alliance of over 300 indigenous peoples’ organizations in Mindanao. Kalumaran seeks to unite the various tribes of Mindanao to defend their land from large-scale mining, commercial logging, and agribusiness projects.

Cristina Palabay is Secretary General of Karapatan Alliance for the Advancement of People’s Rights, the preeminent human rights organization in the Philippines. In addition to monitoring, documentation, and advocacy, Karapatan has initiated Rise Up – an organization of survivors of drug-related extra-judicial killings.

Edre Olalia is the President of the National Union of People’s Lawyers and legal consultant to the NDFP peace negotiating panel. He was a participant to the recently concluded fourth round of GRP-NDFP peace talks.

Christopher Hamera is a United Methodist Missionary from Malawi that spent two years working with indigenous community schools on the island of Mindanao.

For more information or to get involved, contact ichrp.usa.northeast@gmail.com

Register for Event: April 19, NYC: Beyond the Drug War: The Struggle for Peace and Human Rights in the Philippines