Washington, DC, April 18-22: Days of Action to End the blockade of Cuba 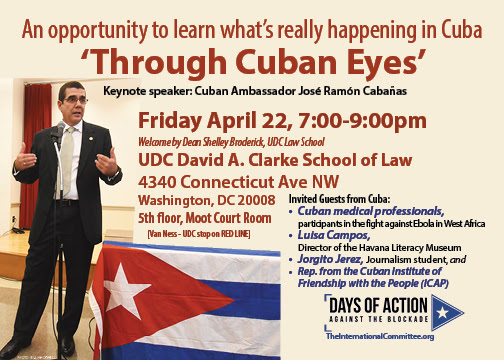 Organized by the International Committee for Peace, Justice and Dignity:

From April 18 to the 22, 2016, Human rights activists, lawyers, members of labor unions, authors, students and organizers will gather in Washington, DC to meet with members of Congress to push for improving U.S. relations with Cuba.

Sign Up!  Let us know you are coming to be included on one of our advocacy teams. We will take care of the details, like setting the appointments with members of congress and providing an orientation for everyone participating.

Sign Up!  Attend the Forum “Through Cuban Eyes“. This evening event will give you an an opportunity to interact with our Cuban guests.

And don’t miss the Washington D.C. film premiere of “The Power of the Weak“, the story of Jorge, “Jorgito” Jérez, who was born with Cerebral Palsyin Cuba in 1993. The movie shows how a society structured to support human development can make the disabled powerful. Meet the fimmaker Tobias Kriele and Jorgito at the film viewings.

Film Premiere in Washington DC:
“THE POWER OF THE WEAK”

This documentary by German filmmaker Tobias Kriele, tells the story of Jorge, “Jorgito” Jérez, born in Cuba in 1993 during the special period with Cerebral Palsy. The movie shows how a society structured to support human development can make the disabled powerful. Provided with care from birth by Cuba’s health care and education system, Jorgito is now a self-sufficient, independent young journalist contributing to Cuban society. Tobias Kriele and Jorgito will be at the viewings in D.C.

For those of you who cannot join us in Washington D.C. you can still be part of the Days of Action Against the Blockade
Some actions you can take:
Download our latest brochure explaining what Obama can still do and what he cannot do and also download the Palm Card for the April 22 Forum:“Through Cuban Eyes”and help us spread the word.

Register for Event: Washington, DC, April 18-22: Days of Action to End the blockade of Cuba